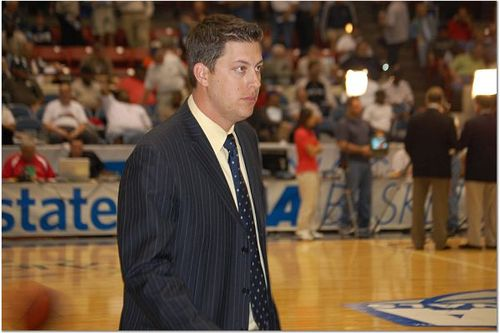 I’m almost 39 years old. I’ve been coaching high school basketball for exactly one-third of my life. According to Webster’s, I’m 6 years away from being considered “Middle Aged”. But that’s in human years, not coaches’ years. I’m exhausted. I don’t have the patience that I once had for you…the energetic, hardworking recruiter, trying to form a relationship. Don’t get me wrong, I welcome your call. Your call is why I coach. I make a vow to our players that I’ll be their advocate and I consider it my job to make sure that guys like you know they exist. With that said, I need to ask a favor…one that will spare my limited energy supply and simultaneously earn my respect. JUST SAY NO! It’s ok. I’ve helped guide 54 teenagers and their families through the college recruiting process and in doing so, I’ve met hundreds of college coaches, each with their own recruiting style. The best recruiters that I have ever dealt with are those that have the ability to be decisive and honest about their needs as a program and their evaluation of my players. I repeat…DECISIVE and HONEST! If you need a point guard and don’t think mine is good enough, please, JUST SAY NO! Don’t have me dig up film, share the player’s contact, and send you his transcripts because you think that softens the blow. I know, I know, things change quickly and it never hurts to keep a few kids warm, but just understand that us high school coaches know if you’re really interested in our guy. You’re not fooling anybody by acting like you’re more interested than you are. Conversely, if you are genuinely interested, make it known by being consistent. Consistency works. I promise.

An example of what I mean. In the Fall of 2009, we were preparing for our season. Our two best seniors that year were future McDonald’s All-American Fab Melo (RIP) and a lesser known player named Will Sheehey. Both were very good. Thanks to Fab, we had dozens of high major coaches attend each of our open gyms. I’m talking about current and future Hall of Famers. Many of them “really liked” Will. They liked him enough that they’d make the initial phone call to him and his family and then for no explainable reason, disappear for days/weeks on end. I wish those coaches had just said no. They were never getting the kid with that approach anyway. Instead, I spent months on a recruiting rollercoaster with Will and his family. Then Indiana’s Tom Crean showed up. He sat through 10 minutes of our open gym, offered Will a scholarship, went back to Bloomington and he and his staff went to work, consistently and precisely recruiting him. They recruited Will like they absolutely needed him and they did it from that open gym until signing day. 1,120 career points, a Big10 Title, a few Big10 individual accolades and a game winning NCAA tourney shot to send IU to the Sweet 16 later and Coach Crean looked pretty smart. He knew what he was looking for, he saw it, and he pounced…decisively and consistently.

Several years ago, we had a player who was intensely recruited by a number of Top 25 caliber programs and he decided to narrow his list and take 3 official visits. I discouraged scheduling visits 2 and 3 because the front runner was scheduled first and the kid had already shared with me that he wanted to go to that school. Anyway, the front runner spent a year recruiting the player and did so exquisitely. They did everything right, including the official visit. The coaching staff expected a commitment before we left campus. Even to my surprise, they didn’t get it and the player decided to take his second visit the following weekend. The frontrunner was still the frontrunner…and I tried to calm their nerves by telling them that. All they had to do was BE CONSISTENT and continue to recruit the player just as they had done the entire year. Instead they panicked and changed their approach completely. It backfired and they lost the kid to another program. Consistency is everything.

I’m often asked by college coaches, based on my experiences, who I believe the best recruiters in America are. After reeling off the top 5 or 10 names that come to mind, the follow-up question is “What makes them so good?”. Well besides being decisive and honest, here are a few things that I believe all of them have in common.

1) They all understand that relationships are not formed overnight.
– There are coaches that attend our open gyms every year without ever actually offering one of our players. The same guys call and stay in touch. When the time comes and they fall in love with one of our players, they know that I won’t forget that.

2) They quickly figure out what matters to the people.
– There was a Coach (We’ll call him Coach H) that came to one of our games a few years ago. I really wanted him to recruit a particular kid on my team. He really liked the kid but didn’t feel like he fit their need. I was disappointed. The next day, I received a call from the Head Coach of another program who was referred by Coach H. He was calling about the same kid! Coach H saw in my eyes that this kid was important to me and wanted to help me help the kid. For as long as I coach, Coach H is getting a call when I have a kid for him to recruit.

3) They understand the importance of consistency.
– Kids and Parents, like most people in the world, like consistency…and good recruiters recognize that. If they start off calling a kid every single day, they call every single day until he makes a decision. If they start by calling once a week, they continue to call once a week. They keep their message and their approach consistent.

4) They don’t overstate opportunity.
– Most kids (at least the good ones) want to feel challenged. I’ve never understood when a coach leads by pointing out the glaring void on their team. “Look at our team, Timmy. We have no one that can handle the basketball. You’ll be the best ball handler we have the first day you step on campus”. I’ve always thought it was a better approach to show the kid everything the team does well and challenge him to come in and help the team improve on the things they don’t.

5) They don’t “negative recruit”.
– This may come as a surprise, but I would say that a significant majority of the coaches that I’ve dealt with in recruiting have not used negative recruiting as a tactic. Those that do, with very rare exception, seem to be coaches from losing programs. I don’t think that’s coincidence. Don’t spend your valuable time with a recruit, his coach or his family talking about someone else’s program. You come off disingenuous and insecure AND…I’ve never seen it work.

I’ll close by saying that I’m honored to be able to share my experiences and my opinions. This forum is an incredible opportunity for all of us to share ideas, tips, strategies, etc. My perspective is that of a high school coach and it may very well be different than the perspective of those of you who have coached at a different or higher level. In the short time that I’ve been following Coach-Speak.net, I’ve absorbed things that I believe will make me a better coach this upcoming season. My sincere hope is that I’ve contributed something that will help you as well.

Adam Ross has spent 9 seasons as the Head Coach at Sagemont and amassed a Career Record of 218-49 along with 5 State Final 4 Appearances, 2 State Championships, an appearance in Dick’s National Tournament in 2014 and a State High School Coach of the Year Award in 2014.

3 thoughts on “JUST SAY NO by Adam Ross”