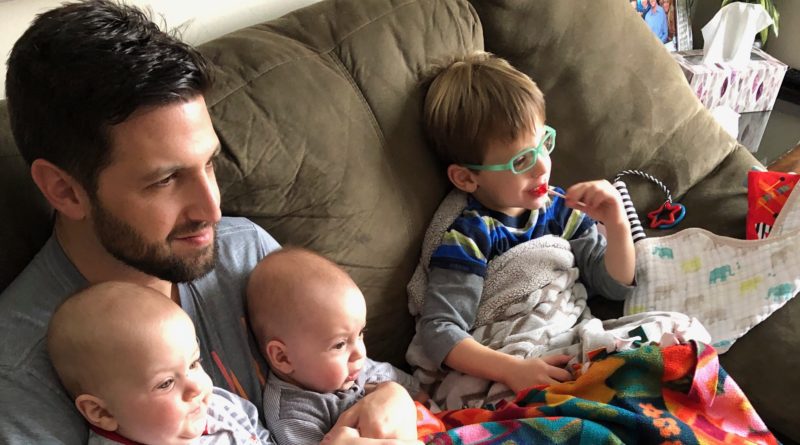 Everything was going relatively well until we woke up to four voicemails. Our phones had been on silent as we tried to get a few hours of sleep. The messages were all from INOVA Fairfax Hospital in Virginia, with the doctors telling us to get to the hospital as soon as possible – your 5-week-old daughter is sick.

Eliana and her twin brother, Jordan, were born four months early and weighed less than two pounds at birth. For five weeks they had been in the Neonatal Intensive Care Unit (NICU) proving to be fighters making steady progress.

My wife, Caitlin, and I rushed to the hospital early that Wednesday morning to find out that Eliana had developed Necrotizing Enterocolitis (NEC), an infection that inflames part of the baby’s intestines and almost exclusively affects premature children.

The doctors were able to get Eliana fairly stable and told us we were in a better spot than we were earlier that day, “but still not out of the woods”. That was the exact line. But less than 24 hours later, things took an awful turn. It all felt like a blur and yet is so vivid in my memory. As our daughter’s heart rate was dropping, a surgeon was standing over her trying to figure out if he could provide us with any hope – but he knew her body couldn’t handle any type of surgery. It was then that we made the decision to take off what felt like a million wires covering her tiny little body and turn off the machines helping her fight. We held her. We sat in a cold brightly lit NICU and held her while she passed away.

It was April 16, 2015 and we had just experienced every parent’s worst nightmare. With aching hearts and shaking bodies, we turned around in that same cold brightly lit NICU to see our son still fighting for his life. We would visit him there multiple times a day for the next three months.

I was in my second season as an assistant coach at American University when Caitlin and I decided we wanted to start our family. We met while playing basketball at Princeton.

It was a surprise when we found out we were having twins, but we were both eager and excited for the possibilities ahead. However, at Caitlin’s 20-week ultrasound, the doctors saw there were potential issues looming with the pregnancy. She was put on hospital bed rest that day (at 20 weeks) with the goal of getting to at least 24 weeks when the babies would be considered ‘viable’. The bed rest came directly in the middle of league play for our team. I would sleep every night at the hospital when we didn’t have an away game.

The pregnancy was still looking relatively good at the 24-week mark, which was encouraging.

On the basketball side of things, we had reached the semifinals of our conference playoffs and were playing next at Colgate – a six-hour drive from American University in Washington D.C. Caitlin called me while our team was about to watch film in Hamilton, N.Y., on the day of the game, and nonchalantly told me she had a little bit of a headache, they were moving her to the labor and delivery unit, and were giving her some drugs to help offset her body from potentially going into labor. She presented it to me like everything was fine, insisting it was not a big deal, so I stayed for our game. In retrospect, the words “labor and delivery” should have probably raised a red flag for me.

We played really well, winning 73-62, and were headed back to the conference finals with a chance to make the NCAA Tournament for the second year in a row. I returned home at 2 a.m. Caitlin’s mom was with her in the hospital, and they both assured me all was good – and that I should sleep at home, get some rest, and come by in the morning. I got up at 7 a.m., grabbed Starbucks and headed over to the hospital. Shortly after arriving, the doctor came in, examined Caitlin, and told us the babies were going to be delivered in 30 minutes. They were going to do an emergency C section. I believe my exact words were, “Oh sh*t. Here we go” and put down my half-eaten yogurt.

The babies were born weighing less than two pounds each, and immediately after their birth, I frantically followed the team of doctors escorting our children down to the NICU. It was a very nerve-racking environment. Jordan was on a ventilator and Eliana was on a slightly less invasive breathing machine. Following high risk births involving NICU stays, while your wife is still in the operating room, the medical staff takes you to the NICU and has you sign a slew of papers, essentially allowing them the freedom to do any and everything in their power to try to keep the little babies alive with medical intervention (blood transfusions, etc.). After signing what felt like 50 documents and briefly seeing our children, I went back up to visit Caitlin in her hospital room. I was somewhat of a wreck. Despite being slightly prepared for the babies to come prematurely, I was certainly not prepared for just how tiny the babies were (13 inches long), how sick they looked, and how helpless I felt as a parent.

We were scheduled to play at Lafayette in the championship game three days later. In the days leading up to the game, I was in the hospital all day, every day, except for the few hours we practiced. I didn’t travel with the team to Easton, Penn., but instead, drove up with my father on the day of the game. In the NICU, the nurses are constantly encouraging and reminding you to take life one day at a time, as things can change (for good or bad) very quickly. I didn’t want to be away long. We lost by three in a heartbreaker, and I drove right back home.

I am forever grateful to Coach Brennan, our staff, and our administration at American for understanding the support, love, friendship, and caring that was necessary for my family at that time. Caitlin and I both needed to be around each other for emotional support to get through everything. It was a lot. In the immediate aftermath of Eliana’s passing, and at times in the fall of the following 2016-2017 season, there were moments when I felt like I was letting down the team and the staff by working from home at times and not being around as much as I had been previously. But our head coach, Mike Brennan, always told me, “Scott, do whatever you have to with and for your family. That is the most important thing.” Everyone at American, from Athletic Director Dr. Billy Walker on down, echoed those sentiments. I am glad I didn’t have to choose my family over my job. I know it’s not always like that in every situation. I am lucky.

Another bright spot during a period of devastation was the outreach and support our family received from players and coaches I’ve both coached with and against. AAU coaches I had never spoken to before in my life donated money to Eliana’s March of Dimes Page, as did opposing coaches in our league. It was genuinely overwhelming to see the generosity, compassion, empathy, and sympathy from a range of people – some whom I barely knew, and some whom I was in constant competition with.

In 2017, as Jordan continued to be a thriving and healthy 2-year-old, Caitlin and I decided we were finally ready for another child. The day before we went to the doctor for our first ultrasound, we were lying in bed and laughed after I turned to Caitlin and said, “you know, there is a chance we could have twins again.” We both went to sleep on that note.

The following day, when we went in for the ultrasound, we made sure to briefly tell our story to the technician so that she understood the emotion the day could bring. We also told her we had been having thoughts that we could have twins again or even triplets. She laughed. Once the ultrasound video popped up on the screen, our technician stopped, looked at us, and said, “do you see that?” We saw it. Yet again, we were having twins. Given our past, hearing/seeing that was truly frightening and brought up a range of emotions. But, through it all, we tried to stay positive, knowing there were precautionary steps the doctors would be able to take this time around.

The pregnancy went 37 weeks and our twin boys were born healthy on July 27 of last year. Brayden was almost eight pounds and Eli was six pounds. Eli is named after Eliana.

My wife has been amazing through all of this. She is the strongest person I know, and she has helped me strike a balance between family and work. She realizes how important coaching is to me and has never made me feel guilty for taking the time away from our family to be around the team, recruit, and coach. Our staff and I want to make American University the best program it can be, and Caitlin has continued to be right there supporting the long hours away from home I dedicate to American while also not letting me lose sight of being the best dad and best husband I can be. It’s not an easy balance, but my family keeps me laughing and full of love – and then I come to work where I’m surrounded by the passion and energy of our team. It’s an exciting, eventful, fun, and fulfilling way to live life!

There is not a day that goes by where we don’t think about Eliana. One of the nurses at the hospital gave us a pillow in the shape of a heart as a gift that always sits on our bed. It weighs exactly what she weighed when she passed away. Every April, we honor Eliana’s ‘angelversary’ by taking a timeout from life and getting away for a couple of days to just talk about her. Caitlin always reminds us that we most likely wouldn’t have Eli and Brayden if Eliana had remained healthy. Of course, we wish she were here with us, but the twins help keep her memory alive. She will always be a part of our family.

Scott Greenman is an Assistant men’s basketball coach at American University Under Coach Mike Brennan. Prior to his time at American he served on John Thompson III’s staff at Georgetown for 3 seasons. Prior to Georgetown coach Greenman spent 3 years as an assistant coach at Princeton. Coach Greenman served as the Jead Coach of the U18 USA Maccabiah Team in 2009 that won the silver medal in the Maccabiah Games. Scott was an All Ivy Player under Coach Thompson at Princeton from 2002-06.

(As told to Rhiannon Potkey)