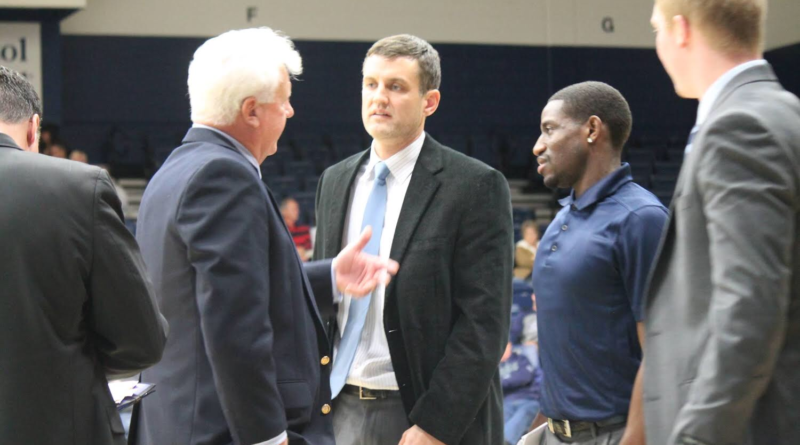 …A very common expression heard on Rockhurst University game days. Oftentimes to appease a scrutinizing referee and many times varying in tone, intensity and volume. Regardless, an expression with the significance that makes me lucky and blessed. In my 15 year coaching career (which included assistant coaching stops at a high school, college stops in Conference USA and the ACC, followed by two small college basketball head coaching jobs), the most commonly asked question of me is, “What is it like to coach with your dad?.” It is a unique experience. An experience that I felt was natural to pursue upon getting the head coaching job at Cardinal Stritch University in 2009. My dad had retired from high school coaching in our home town of Fond du Lac, Wisconsin. He still loved the game and loved competition. He had a Hall of Fame coaching career and had a fiery and intimidating reputation due to his competitive spirit. Many thought, “How is Dick going to be an assistant?” “How will he handle not being in charge and not being able to stand up?”  Those questions didn’t make me hesitate for one second in asking him to “help me out.”  And he did. He drove one hour each way to practice every day at Stritch. When I took the job at Rockhurst University in Kansas City, he and my mother found a condo to sublease during the basketball season. We have now coached together nine years.

It feels amazing. Again, I feel lucky. That’s really what comes to mind first when folks ask me “what is it like?” From a professional standpoint I credit much of my success to his presence. In my first year as a head coach, he had ideas, answers and experiences that resulted in success both on and off the court. I had played for him in high school, but as a colleague, I was working with him to make decisions. It was a totally different experience. I always felt like I had a “stacked deck” with him on our bench compared with other young coaches and limited staffing. He joined my staff when he was 60 years old. Older assistants sometimes get labeled as “stuck in their ways.” But, my dad was and is very innovative, creative, and open to ideas and suggestions from anyone. He likes to ask questions of the players to see what they think or see. He does all this while being the most intense person in the gym and raising the intensity level for everyone in the program. He handles “not being in charge” as an absolute professional. He has always had a great feel for people, so he knows how far to push and when to pick his spots. We don’t agree on some things, but he is always supportive and loyal to my ultimate decision, whether it works out or not. That is an incredible trait to have and a strength of our program.

From a personal standpoint I feel truly blessed. During these last nine years I have shared some great highs and incredible lows with my dad. Of course, there is the time spent during practice and games, but also, there is the time spent in our shared office.  Just laughing about things, arguing about sports or old YMCA teammates, calling my brothers on Skype, playing racquetball, comparing guys’ abilities to old Fond du Lac HS players (whom I grew up idolizing.)  Then, there is the time on the road together for bus rides and hotel stays. When it works out I bring one of my sons. They enjoy getting to sit by “Grandpa Dick.” It is just a really good feeling and a unique experience for my whole family. I don’t take it for granted. I have prayed about it and thanked God many times for His plan. Most home games we ride together from his downtown condo to the gym. It always reminds me how blessed I am. It is only a 12 minute ride, but I know it is a really special 12.

Of course, keeping perspective is challenging in basketball and sports. While my dad was our High School head coach, on game days there was an unwritten rule in our house – no screwing around while dad got his “game face” on. He sure was ornery on game days. If we got out of hand, we got chewed out. And, if dad’s team lost the next day was absolutely brutal. No noises, laughing or messing around. It was best to go outside or to a friend’s house for the day. As an assistant coach he is, thankfully, much more relaxed on game days. He still takes losses hard and, in some ways, it’s good to know someone is as upset about a loss as I am. In our 2nd year at Rockhurst we lost a heartbreaking game at Quincy in a Christian Laettner-type last second shot that had to be reviewed for over 10 minutes. A game in which you analyze every decision and kick yourself for not making the “right” choice.  It was probably the toughest loss of my life.  I walked the city streets for a while then returned to the room where dad was lying trying to sleep. We didn’t talk much, both too disgusted about the loss. For many hours that night, he would randomly shout frustrations into the room, knowing that there was no way I could be sleeping. I remember lying there thinking how much I hated sports, but also, realizing that someday I may crave to experience another night with my dad shouting obscenities into our shared room.

There have been many more good times than “bad times” that have come from our partnership. Sure, he stands up too much during games. It usually doesn’t bother me much. He has become a very thirsty man as an assistant coach. He is constantly walking down to “fill up his water cup.” Referees keep telling me to get him to sit. To which I respond, “Dad, you have to sit down!”  When I am new to referees, it always gets a second glance. When referees are persistent, I tell them, “He’s my dad, he is not listening to me.” Oddly enough, that usually diffuses the situation. Whether it be to the credit of the referee or my dad deciding to “fall in line.” The entire experience is very special. There is no one I’d rather ask for advice on dealing with a player, creating a scouting report, or breaking down a jump shot. His competitive spirit makes his attention to detail in all areas championship level.  For a guy in his late 60’s, he can navigate Synergy with the “best of them” because there may be an advantage to gain.

While traveling, arriving to the hotel lobby each morning means seeing dad with a cup of coffee and a stack of paperwork in front of him. Synergy clips loaded up. He is ready to greet the team and talk about the day’s “prep” work to be done. Yet, we can also get off topic into some former players, an old YMCA scuffle, our head to head racquetball record, who is a better shooter and much more. Suffice it to say, it has been (more than words can describe) fulfilling coaching with my dad.

EDITOR’S NOTE Drew Diener is the Head Basketball Coach at Rockhurst University in Kansas City. He arrived at Rockhurst after a successful 6 year run at Cardinal Stritch University in Milwaukee where he lead his teams to 6 CCAC Regular season titles, 3 CCAC Tournament Titles and one NAIA Division II National Championship (2013). Diener was named CCAC Coach of the Year 5 times. Prior to Cardinal Stritch, Diener served under Dave Leitao at University of Virginia as an assistant coach and Director of Operations. He also served in the Director of Operations role under Leitao for 2 seasons a Depaul. playing under his father, Dick Diener, at Goodrich HS in Fond du Lac, WI Drew was the 1998 Gatorade Wisconsin Player the Year. he went on to play College Basketball at St Louis University where he had a stellar career.